The Setting Every Community Up for Retirement Enhancement (SECURE) Act is touted to help Americans save for retirement. But, a few “enhancements” might compel you to contact your senator to express concern (after you pick your jaw up off the floor). For instance, inherited IRAs would be dispensed within a 10-year period instead of over the lifetime of the beneficiary as it is now. This poses significant taxation as well as the loss of great income that inherited account can build over your own lifetime.

If this alarms you—read on. The outcome of this bill’s passage isn’t as pretty as our 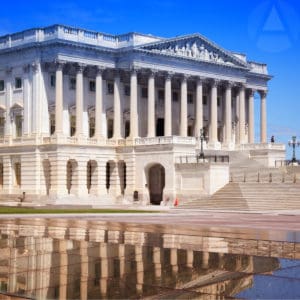 lawmakers want you to believe.

The problems this bill is supposed to solve…

The potential to make it easier for Americans to save for retirement is noble, as statistics show roughly one-third of Americans are not doing so. Many people have no access to work-place plans because their employers can’t afford to offer them. And, part-timers in the workforce aren’t eligible to participate under current regulation. If passed, the new legislation would pave the way for more of these individuals to have access to retirement plans. However, opening the door for these possibilities is not as easy as it sounds.

We’ve compiled some pros and cons the SECURE Act presents below. The final legislation is sure have some changes. Regardless, knowledge is power, and here’s what you need to know.

A Few Provisions of the SECURE Act:

The act removes the age limit for contributions to traditional IRAs. It also allows penalty-free distributions from retirement plans of up to $5000 in the event of child birth or adoptions. And, it broadens the use of 529 plan funds (although that does not include home school expenses and therapy for disabilities, an exclusion that’s at the forefront of Senator Ted Cruz’s strong opposition of this bill).

Perhaps the greatest provision is to treat open multiple employer plans (MEPs) as one plan to help small businesses better afford and offer retirement benefits. It also opens the door for part-time employees to participate. However, while this is helpful for those individuals, many feel this move may defeat its purpose. Even with the provision of a $500 tax credit to businesses that offer automatic enrollment, offering benefits to even more employees is costly. For that reason, including part-timers could force some small businesses to stop offering retirement plans altogether.

Maybe this legislation makes it easier for some to start saving for retirement, but how does it affect those who have well-established retirement plans? This is the kicker…

If you’ve have carefully mapped out your retirement planning endeavors for the past two decades (as many of our parents have) to include leaving a financial legacy to your heirs—you’re in for a rude awakening. In fact, the Wall Street Journal goes so far as to say passage of the SECURE Act will “upend 20 years of retirement planning and stick it to the middle class…and reduce the value of all retirement savings plans…”

The problems the bill presents…

Elimination of the “stretch” IRA

Currently, if you inherit an IRA from a parent, you can stretch the required minimum distributions (RMDs) across the years of your remaining life expectancy. The SECURE Act eliminates that stretch period and forces you to withdraw all funds within a 10-year timeframe instead. That equates to exceptionally large taxable chunks of income in your world.

This allows the government to get their hands on those tax-deferred dollars quickly—and they’ll get as much as one-third more of that IRA’s funds than under current regulations. This has a great negative impact on the beneficiaries’ potential to earn substantial income inside inherited IRAs over their lifetimes.

Additionally, parents who inherit IRAs face potential hikes in their taxable income. This can eliminate their ability to apply for much-needed financial aid to pay a child’s college tuition.

Spouses are exempt from the new rule and are able to stretch distributions over their lifetimes as under current regulatio­­ns. But, there is a glitch here, too. The SECURE Act proposes to push the age for RMDs from 70 ½ to 72. Well, once they become widowed, they’re required to file in the higher single-filer tax bracket. As they age, distributions are allocated in larger amounts—further increasing their taxable income, which effectively decreases the amount of income left to live on.

The proposal of annuities as payout options in 401(k)s

This provision is the insurance industry’s absolute and wildest dream. In 2018, insurance companies reported sales of over a whopping $230 billion in annuities. And, of course they’d like to see that number rise. So, what’s the problem with annuities? Well, we think Knoxville News Sentinal columnist, David Moon, sums it up perfectly in a recent article:

“The real purpose of the bill is to make it much easier to sell annuities within 401k plans. Period. It is a piece of insurance company legislation jokingly masquerading as something to help the little guy,” Moon bluntly states. “In reality, it does the exact opposite. It makes the least sophisticated investors more susceptible to some of the most expensive, complex and illiquid financial products ever created.”

Moon goes on to say, “The insurance industry even managed to have the bill require (yes, require) plan sponsors to essentially include an annuity advertisement in annual participant statements. This ‘lifetime income disclosure’ would project how much money a person might receive if he moved all his 401k assets into an annuity. The bill also provides legal protection for employers if (Surprise! Surprise!) those projections prove to be overly optimistic.”

These are just a few problematic issues that would change retirement planning as we know it. But, they are enough. The careful plan you’ve crafted to help give your descendants financial security when you pass away can end up being more of a financial nightmare for them depending on their situation. And, it becomes the proverbial slippery slope when the insurance industry seems to benefit more than retirees may in the long run as far as offering annuities in retirement plans goes.

So, what are your thoughts? Do you think The SECURE Act is the best play Congress has to offer hard-working Americans who have diligently socked away funds to retire? Do its provisions offer feasible provisions that will really help more Americans save? Or will it hurt more than it helps? These are things you need to think about, and if you’re alarmed…voice your opinion to your congressmen. We are.

YOU HAVE QUESTIONS.
WE HAVE ANSWERS.

Let’s talk so you can learn how to invest in what you know with a self-directed IRA.

Get the answers you need